Welcome back to my Secrets!

This year, I’ll be celebrating 20 years in publishing! It’s been both a lifetime ago and the blink of an eye. When I sold my first book in 1998, I wasn’t even thinking this far into the future, and I certainly had no expectations of spending my career as a published author. I wanted to! But in my mind (and before indie publishing), that only happened for a lucky, exalted few. I NEVER thought it would be me. I launched with some names I’m sure you’ll recognize: Lara Adrian (w/a Tina St. John), Carly Phillips, Julie Kenner, Terri Brisbin—just to name a few. I’m happy and thrilled to be celebrating this milestone with them. I’ll be talking more about that through the year. For now…I’m going to toss out a teaser.

I'm excited to kick off Teaser Thursday with Wicked Ties. Why this book? Well, it debuted in January…of 2007. 11 years ago! Second, it’s the first Shayla Black book released. And, of course, it’s first in the Wicked Lovers series. 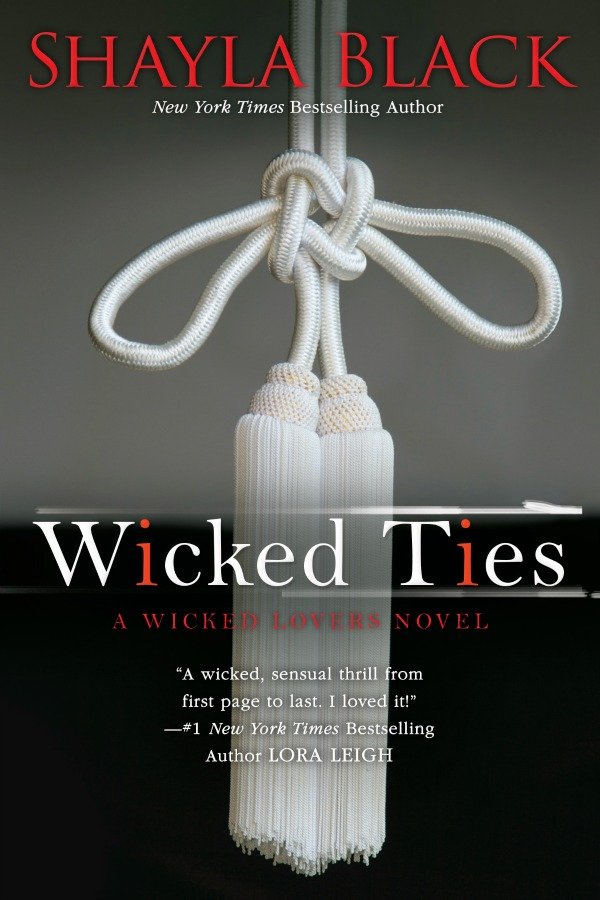 Things you may not know about this book? Jack’s Cajun heritage was based on a dear friend of mine who was tragically killed and I miss him all the time. The song that played over and over in my car (and my head) as I imagined this book is Depeche Mode’s “Enjoy the Silence”. Not even sure why. It just seemed like a very “Jack” song to me. Lastly, I’m often asked for my inspirations. Here are Jack and Morgan and I always imagined them. 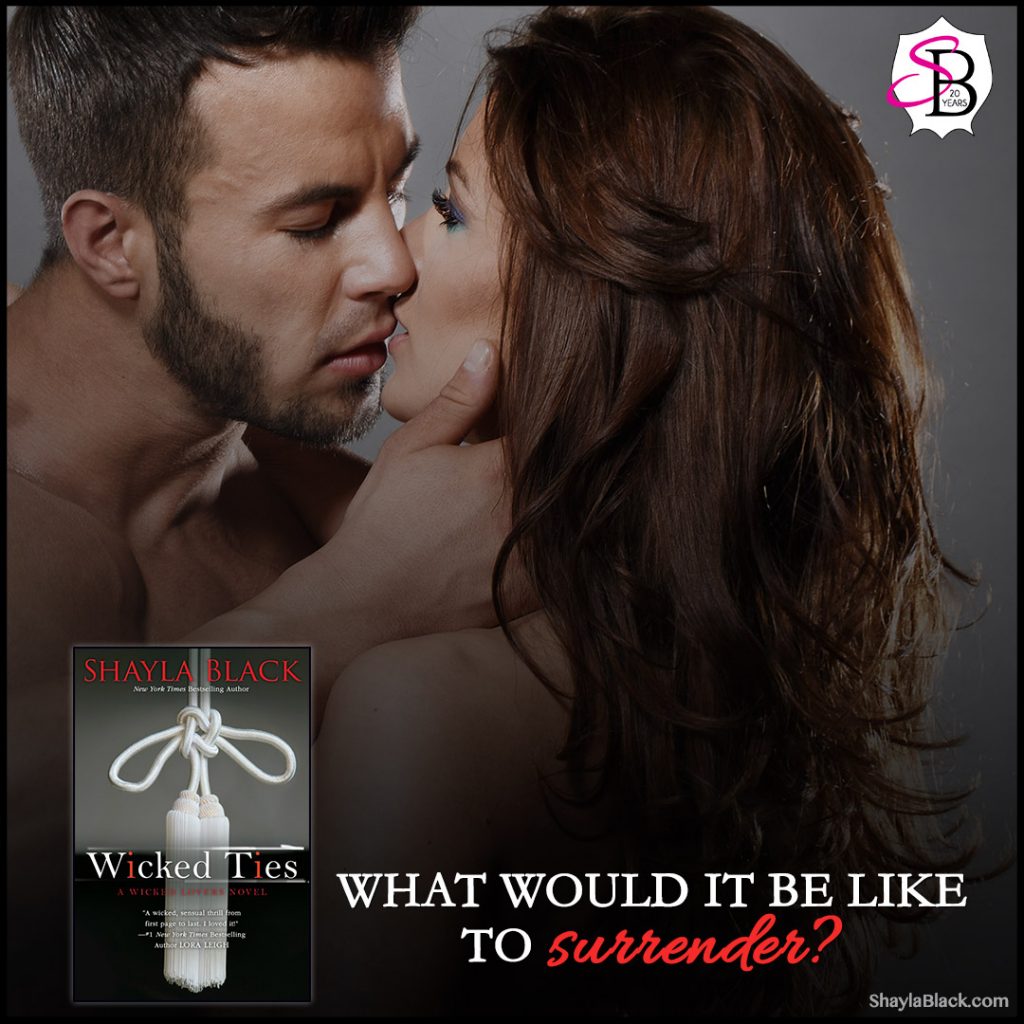 Scroll down to peek at the excerpt featuring Jack Cole and Morgan O’Malley. When I typed the first sentence of this book—Have you ever wanted to put yourself in the hands of a man whose sole purpose is to give you pleasure?—I knew this story would be a crazy ride. Discover “What would it be like to surrender” by reading for yourself below!

Share this Teaser Thursday with your reader friends. I've included a giveaway! For a signed copy of Wicked Ties, read below and find out how to enter. Enjoy!

What would it be like to surrender? To give in to that voice?

Dangerous. Bad. Giving into everything Jack represented and everything she shouldn’t want. If she did, she’d only be forging a new path to hell.

“How about jackass, then? That’s appropriate.” She dug up her bravado and turned to face him. “Don’t bully me.”

She waited for his angry comeback, for a growled command of frustration. It didn’t come.

Instead, he shuffled a heartbeat closer, until a mere whisper separated her from the raging heat of his body. “There is no reason to be embarrassed about your desires.”

“I’m not. Call me repressed, but I am embarrassed about having an audience during orgasm,” she snapped.

“That’s not true,” he said softly.

Swallowing, Morgan tried to tear her gaze from his knowing, sexual stare. His scent assailed her next, full of man and mystery, spicy as Cajun food and as hard to fathom as the swamp itself.

She inched back. “Do you think you know me now?”

“I know things about you. I know you’re uneasy about your sexuality. You have desires you don’t like to admit to. I see them all in your eyes. A craving to be bound and dominated—”

“You don’t see a damn thing! I’m not depraved.”

“No, you’re not. Anyone who thinks you are is an idiot.”

Jack reached for her again, determination all over the fierce masculine angles of his strong face. She didn’t want to know exactly what he was determined to do. Panic flared, and she batted his hand away and leapt out of his reach. Her back hit the door.

And Jack kept coming for her with soft, slow steps. The pace of a hunter. She had to get away. Had to. Now.

Morgan lunged to her left to evade him. He blocked her way with a strong arm, then anchored it on the door, sealing off that avenue of escape. He used the same tactic on the right before she could make a move in that direction.

Then Jack leaned in, placing one hand on the door, just next to her head. She couldn’t look at him, refused to. As if to get her attention, his body brushed hers, detonating ruthless sparks of

desire that burned through her body. Still, that brief contact was enough to light her up like a firecracker.

“Look at me.” He leaned back to put a breath of air between them.

Something inside her wanted to obey. That smooth, rich voice with the hint of French lilt and explicit command tugged at her. The thought of surrendering made her stomach clench with anxiety…and desire gnaw at her clit. The man was a giant contradiction. An aggressive protector. A man who bound women was going out of his way to keep her safe.

Finally, she raised her stormy gaze to clash with his. “What the hell do you want from me?”

“No, you don’t. You want me to give in, to spread my legs like a spineless airhead and give you…whatever it is you want.”

A half smile curled up the side of his mouth. “You’re half right. I do want you to give in, cher. I want you to spread your legs when I tell you to. Not because you’re spineless, but because you’re not.” He moved in closer, brushing his body against hers again, all hint of a smile gone. “I want you to burn for me. I want all your fire and independence and sass underneath me. I want to show you what you secretly yearn for and try not to—and how good it can be.”

Morgan swallowed, then opened her mouth to speak. How was she supposed to reply to that? What did a woman say to the man trying to spoon-feed her every sexual fantasy she’d ever denied?

Oh, she’d thought of those.

One of his hands eased away from the door. He brushed the back of his fingers down her neck, over her collarbones…and kept delving down. He caressed down the terrycloth-covered slope of her breast, then brushed down over the erect nipple begging for his touch.

Even through the towel, she felt that touch all the way to her toes. A hot tingle sizzled her insides like bacon in hot grease.

She gasped, felt her gaze locked in place by his dark stare.

He repeated the process again, then once more. Pleasure assailed Morgan from the aching points of her tight nipples, streaking through her tightly coiled body, straight to her vagina.

She dropped her head back against the door, unable to hold in her moan.