Today I have a new audio release of one of my classic historicals, Strictly Forbidden! If you're a fan of sexy, angsty Victorian-era romance, I hope you'll give this a listen (or a read, since it’s available in eBook and print, too!) It can be read as a standalone, but it will introduce a couple from a previous book. If you can't get enough, check out Strictly Seduction (also available in eBook, print, and audio.)

Peek at the excerpt featuring the scandalous Kira Melbourne and the stern, savage Gavin Daggett, Duke of Cropthorne. For a chance to win the audio CDs of this book, let me know what you think in the comments below! Winner will be announced in a blog sometime the week of January 22.

Please don't forget to share all my Secrets—and this Teaser Thursday—with your reader friends.

I hope to see you this coming Monday, January 22 for Wine Wednesday Rewind! Until then, hugs and happy weekend!

“You are going to love Miss Melbourne,” James Howland assured. “Truly. Once you come to know her, I’m certain you will.”

Gavin Daggett, the fifth Duke of Cropthorne, nodded with suppressed amusement. His usually imperturbable cousin had been babbling nervously for the past two hours.

In truth, it mattered little if he liked James’s fiancée, much less came to love her. What mattered most was that she suited James, was appropriately well bred, and not the kind of woman to cause scandal.

Though just the day after Easter, an unusually strong spring sun beat down. Gavin lamented the fact that James wished to wait outside for Miss Melbourne’s arrival. Scarcely a breeze stirred, and he was beginning to sweat in his new plum-colored coat. But if he could please James, who had always been like a brother, with such a small act, Gavin would do it without complaint.

Lifting a hand to shield his eyes from the bright afternoon rays, Gavin shifted his attention from the narrow, dusty lane to James fidgeting beside him. He wished the man every felicitation in marriage. Unfortunately, business in London had kept Gavin occupied too often of late to meet Miss Melbourne. He had noted, however, that his cousin’s correspondence had been curiously absent of her name until two weeks ago. Still, he felt as if he should know her or had recently heard her name…

Or perhaps lack of sleep that came with launching a new railroad had finally muddled his mind. With his thumb and forefinger, he rubbed his gritty eyes.

James grabbed his sleeve. “Truly, she is a good, God-fearing woman.”

At the note of supplication in James’s voice, Gavin faced his earnest cousin. “If Miss Melbourne has secured your affection, I have no doubt she is all that is good and proper.”

James gazed down the tree-lined lane, a whisper of a breeze ruffling his wheat-colored hair. His shoulders remained tense. Even men of God could be nervous about matrimony, Gavin supposed with a wry grin.

“Miss Melbourne is very good,” James said finally. “Very kind. She has that rare gift of smiling with her whole face.”

If the nicest thing James could say about Miss Melbourne concerned her smile, she likely lacked the beauty to be the toast of the ton. But such a girl would suit a country clergyman like James, who had never sought beauty, but goodness. Gavin’s gentle cousin yearned for honesty, favored diplomacy, and did his utmost to understand every man’s perspective, sometimes to his own detriment.

With a homely, if kind wife, James need never worry about controlling the infamous Daggett lust, as Gavin’s late father and many other Daggetts before him had—quite unsuccessfully.

Indeed, Gavin himself had used his iron will to repress it for years.

James’s earnest expression told Gavin that his cousin looked for approval, and he smiled. “She sounds splendid. Have you told Aunt Caroline yet?”

Pausing, James looked away, down the lane once more. “Mama has been off in London. I thought it best to inform her of my nuptials in person.”

Gavin nodded, conceding the wisdom of that thought. Aunt Caroline had delicate sensibilities where her only son was concerned. “True. You may share your happy news after she arrives tonight.”

James answered with a stiff nod.

Curious now, Gavin ventured, “You’ve told me a bit of Miss Melbourne but nothing of her family. Do we know them?”

“Not really.” James shrugged, seemingly fascinated by the empty lane. “They are from Suffolk and move in country circles. Her father rarely stays in England. He prefers to travel.” He paused. “Her mother moved… abroad some years ago.”

Moved abroad, away from her husband and children? Had they separated?

Before he could inquire further, the rumble of hoof beats and the jangle of horse bridles sounded `round the bend, interrupting. A simple black coach rolled down the rough-hewn lane, spewing a thin layer of dust in its wake.

“This should be Miss Melbourne and her brother now.” James folded his hands before him, waiting with straight shoulders and a pursed mouth as the carriage came toward Norfield Park, Gavin’s country manor house.

“You will like Miss Melbourne’s brother. Darius is quite the sportsman.”

“Then he will keep this countryside from being deadly dull, I’m sure.”

As the simple black conveyance lumbered and lurched to a stop at the manor house’s steps, James cast a sober glance to Gavin. “Thank you for coming with me to greet Miss Melbourne. I truly want you to like her.”

James was nearly as insistent as a costermonger, Gavin thought with a smile. “I am sure I will come to think as highly of her as you.”

“That is my dearest wish.”

As James stepped toward the coach, the footmen stepped down and opened the door. Dust floated in the gentle wind, almost like a mist around the conveyance. As usual during the spring season, James sneezed.

The first person to depart the coach was a man. As the stranger ducked to exit, Gavin caught a glimpse of black hair. Upon his tall, elegant frame, the man wore a stylish riding costume with a fitted blue coat and well-polished boots. Gavin saw a flash of very tanned cheeks and an aquiline nose before the man turned to the coach and held out his hand.

A woman’s slender fingers appeared from the vehicle next, covered in short gloves of cream-colored silk netting. A single gold bracelet on her right arm, just above her glove, winked in the sunlight. A puffed poplin sleeve of muted blue flowers followed. Then her head emerged—a pale oval bonnet atop thick black curls, as shiny as wet ink. Narrow shoulders appeared in a delicate tiered cape that fell to her elbows. She stepped down to the dirt lane, feet snuggly wrapped in soft kid boots. Though she was surprisingly tall, her movements hinted at grace.

The woman, Miss Melbourne he presumed, looked up. A hint of a smile graced her mouth as her gaze tangled with his.

In an instant, her violet blue eyes stunned him like a kick in the gut.

Miss Melbourne was not exactly a beauty; he had been right about that. But she was the most exotic creature Gavin had ever set eyes on.

And she was James’s betrothed?

Gavin froze, staring at the firm angle of her jaw and her wide, wanton mouth. He could not find a word to say.

A man thought of one thing when he looked at such a woman, and it was not the latest fashion. Gavin swallowed as lust sliced a sudden gash deep through his belly, straight down to his cock. He let out a shaky breath.

Why had reserved James, a clergyman, no less, chosen a woman as sensual as Miss Melbourne for his bride? She was not the kind of woman to blend in with a small country parish, particularly not as the parson’s wife.

She was not the kind of woman to blend in anywhere. 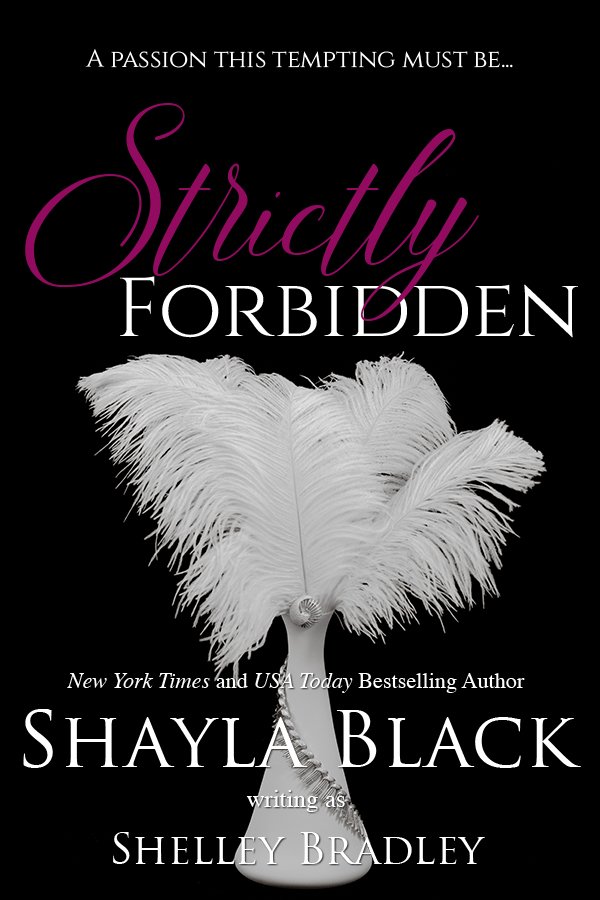