My first love was historical romances. I read them voraciously, so they were the first books I began writing. One Wicked Night might be my favorite of those stories of bygone eras. So let me take you back to days of romanticism, courtship, tradition, and passion. I call this #TBT…the Regency edition.
When Lady Serena Boyce’s husband, the elderly Duke of Warrington, could not give her an heir, he begged her to take a lover in order to conceive a child. She never dreamed it would mean falling in love. One look at the handsome stranger who rescued her from a thief, and virginal Serena was overcome with desire. Dark and compelling, Lucien Clayborne, Marquess of Daneridge, was everything her honor warned her against. Yet the anguish in his soul drew her nearer…and before the night was through, she had gifted him with her innocence.Then the duke was murdered, and Lucien discovered that Serena was pregnant. Still reeling from the death of his cherished daughter and enraged by his first wife’s callous betrayals, Lucien’s honor demanded that he make Serena his bride. But the rapture of their one night together had unlocked feelings he thought his heart had forgotten. And now, a chilling evil threatened their chance to claim a love that promised to last a lifetime.

“Oh, sweetheart.” His voice was hoarse as he grasped her wrists and drew her stiff arms from her body. “Never hide. You are far too beautiful for that.”

He lifted her to her feet. Bending before her, he grasped the hem of her dress and lifted it above her, his hands making tingling contact at her hips, her waist, then a lingering touch on her breasts. He tossed the dress on the floor.

One by one, Lucien tugged on the waist-ties of her petticoats. She trembled as the garments caressed her legs on their way down, before puddling about her feet.

Lucien held out his hand. Serena watched him, his face tense and needy. He clenched willing self-control. Those green eyes of his, and every emotion within them, were open to her and melted the last of her resistance. They conveyed the hunger of a man too long without sustenance, both physical and emotional.

As she returned his stare, his breathing turned ragged. She swallowed when he reached for her hand, enveloping her palm within his warm, commanding one and urged her to step from the circle of her petticoats.

Silently, he turned her away, and set his fingers to the lacings of her corset. Within seconds, he tossed the stiff-boned garment from her body.

His hands smoothed the wrinkled linen of her chemise, stroking the curve of her waist. The heat of his palms penetrated the thin material, and the pulsating ache thrumming between her thighs throbbed faster, demanding his attention.

As his hand rose to her shoulder, their gazes locked. His hot fingers on her skin flooded her insides with a rush of warmth and anticipation. Using one forefinger, he slid the sleeve of her chemise down to her elbow. Still holding her gaze captive, he did the same with the other.

Serena felt her undergarment cling to the tops of her breasts in a valiant effort to cover them. Lucien hooked his thumb on the tautly-stretched fabric. The chemise fell to her waist, baring her breasts, tight nipples and all, to his rapt gaze.

He swallowed hard as he reached out to caress her. When he took her breast gently in hand, his thumb brushing its beaded center, she closed her eyes for a brief moment and reveled in the cascade of warm pleasure.

Lucien covered her mouth in a hot, urgent kiss. Serena found her arms still pinned to her sides by the sleeves of her chemise. Denied the luxury of clasping her hands around his powerful shoulders and bringing him closer, she returned the kiss with her mouth, using it to communicate the depth of her need.

He pushed her chemise over her hips, down to the floor. Naked, she stood before him, he still fully clothed. She watched his gaze sweep across her breasts, over her abdomen. His eyes stopped at the golden triangle of hair covering her femininity. She shivered. The appreciation in his eyes dissipated her misgiving, replacing it with anticipation that burned like a flame.

She stepped forward, against him. His arms tightened around her, bringing her against the hard crush of his body. At the abrasion of his clothing against her flushed, tingling skin, she shifted restlessly in his arms, seeking some form of relief from the ache he had created. 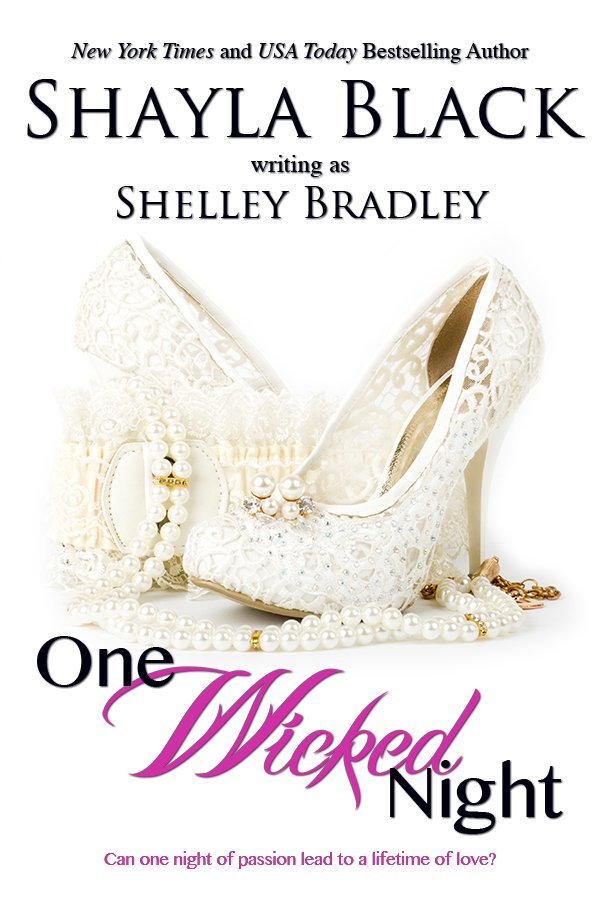