This week’s #TBT is dedicated to His Stolen Bride.

My passion for romance began with historicals and that same fire burns today.

The medieval Brothers in Arms trilogy focuses on three daring knights and winning the hearts of the women they love.

Evening shadows lengthened across Dunollie’s garden when Drake sneaked onto the quiet ground. He ducked behind the thick of a rosebush, waiting for the right moment to steal inside the keep.

Tonight, he would finally seek vengeance. This insufferable waiting would finally end. He could avenge his father’s murder, as well as repay Murdoch for his mistreatment in the hell of Dunollie’s dungeon.

A movement, a blur of color to his right, made Drake whirl around. Between the waxy leaves of his cover, he tensed, willing his breathing to silence. He assessed possible escape routes as his gaze sought the source of his alarm.

An unfamiliar figure swayed down a nearby path with movements like a willow in a gentle breeze. Though distance and dim lighting obscured her face, the natural grace of her motions, along with her delicate silhouette, marked her a woman.

Curious, he slid from the hedges, closer, taking refuge behind the dye house a few feet from the garden’s new occupant.

Drake watched as she wandered through the summer foliage. She fingered hyacinth stalks of various blues as they stood proudly, boasting delicate pastel petals, then plucked a climbing rose of perfect pale yellow.

By the flash of white teeth, Drake knew she smiled. His curiosity rose again as her smile faded, replaced by a melancholy mantle. He shook the observation away, reminding himself he had come to exact revenge, not take in the garden’s scenery.

Still, Drake did not remove his gaze from the woman as she raised the rosebud to her small red mouth. He noticed then a heavy bracelet encircling her wrist. The bauble had been that of Murdoch’s mother. If a new woman wore it, ’twas likely a betrothal gift. The elaborate jewelry looked more a manacle than an ornament on her fragile wrist. This mystery woman was Lady Averyl Campbell. She would be Murdoch’s downfall—and Drake’s key to success. ’Twas of no consequence that the Campbell woman was beauteous.

He watched Averyl stroll toward a riot of pink mums. She paused beneath a torch illuminating the garden and reclined against the stone wall of the keep. Holding the small bloom to the curve of her breast, she closed her eyes with a feathery sigh.

That sound shivered its way down his back.

Her fair skin glowed golden-pink in the sconce’s light. A delicate nose, firm, high cheekbones, and a small but stubborn jaw lent her a look that was both ethereal and sensual.

She tilted her head back, as if in worship to the moon. His gaze followed the arch of her neck, the stirring lift of her soft bosom as she inhaled a floral-tinged breath. He found himself drawing in a ragged breath as well.

Forcing his gaze lower made her no less enticing. Her body was tempting, womanly.

Graceful shoulders rose above the inviting curve of her breasts above her small, tapered waist.

She must know how much she enticed a man. His mother always had. Why should a Campbell whore be any different?

Despite his contempt, lust coiled through Drake, pooling heat low in his belly. His enemy’s woman was a surprise—not that such mattered. Lady Averyl was a part of his plan, would soon be a temporary—but necessary—part of his life. Her role in this unfolding drama of vengeance was merely that of a pawn.

Averyl opened her eyes and looked about. He watched in puzzlement as she looked to her left and right, as well as behind. Had she detected his presence? Cursing, he tucked himself tighter behind the dye house and glanced ’round the side.

A moment later, Averyl plucked away the white cloth adorning her head. With a shake, she moaned, and a cascade of soft curls tumbled down in touchable flaxen waves that ended at her waist.

His belly clenched. Striking. Enchanting. Exquisite. The words flowed from his mind.

As he shoved them away, Averyl lifted her tresses and tossed them about, as if relishing freedom. She arched her lissome body into the evening wind.

Murdoch was unfortunate indeed that he would never know this beauty, even if she was a bloody Campbell, as a wife.

He smiled with malice. Robbing Murdoch of Lady Averyl’s wifely comforts would be yet another measure of revenge he had not expected but was more than pleased to deny his half brother.

An older, unfamiliar man stepped into the garden. He raced to Averyl’s side with all urgency, eyes bulging.

“Child, put your wimple on. What if MacDougall sees you? Though he will see all that hair soon enough, you must not reveal that…mass until after your vows have been spoken.”

Mass? Drake gaped at the addled man’s words. Her curls looked soft as down. Without them, she would seem somehow…plain, Drake thought. The tresses gave her the appearance of innocence and innate sensuality at once.

With her money-grasping, Campbell-thinking ways, however, such was surely naught more than illusion.

The portly man embraced her. “Would that you were a beauty, lamb, a tall girl with smooth hair and a more generous breast. It pains me to chastise you so. I hope you understand.”

“Now come inside,” her father instructed. “’Tis time and past you retired. Murdoch just informed me that, on the morrow, you are to be betrothed.”

A joyous smile lit up her face. She clapped her hands and gave a small shriek of excitement.

Drake wondered how much she knew—or not—about her choice of husband.

“Truly. Now, get you inside, girl. You must look well for your betrothal, and this damp air will only curl your hair more.”

Some of the light left her eyes as she cast them down. “Of course, father. I shall retire directly.”

The aged lord stayed her when she would have walked away. “I am proud of you, Averyl. In spite of MacDougall’s striking figure, you have not shied from your faults. You do me credit.”

Averyl turned from her father. Moonlight settled across her solemn face. With a tight squeeze of her lids, she blocked Drake’s view to her luminous, expressive eyes. She bit her lip to hold back tears.

Anger washed through him. It irritated him nearly as much as her father did. Ramsey

Campbell ought to be beaten, at least until he could see the beauty of his daughter’s face.

As he watched her disappear inside the castle, he shrugged the sensation away. Averyl’s trials, whatever they might be, were of no concern to him.

Alone now, Drake looked about. Night had fallen completely, a storm was brewing in the angry sky, and the guard he’d gifted with a jug of ale had finally passed out by the wicket gate.

He had missed every possibly lethal clue while watching Murdoch’s betrothed. Drake frowned at his lack of concentration, knowing he could ill afford such distraction. In two hours, the course of his life, and Murdoch’s, would forever change.

But perhaps Lady Averyl’s would change most of all. 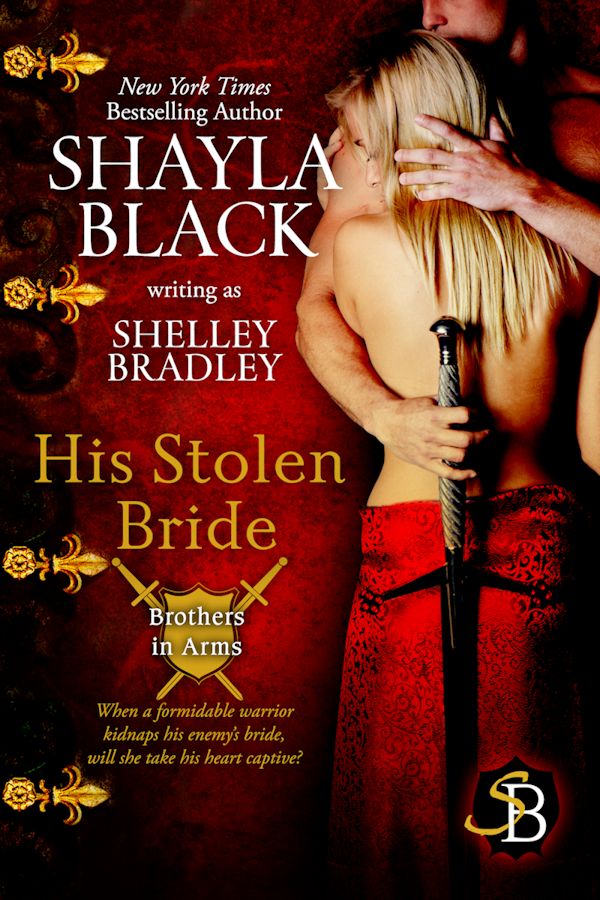