This week’s #TBT is dedicated to His Rebel Bride.

I began my career writing historical romance. I had always loved reading medievals, but I was wary of writing one. When my publisher at the time approached me about writing a trilogy, I decided to pen the three books that had been rolling around in my head. I absolutely loved writing these books, but His Rebel Bride contains a hero I have a huge soft spot for. Kieran is a rogue. He’s the historical version of a playboy. He’s got a sense of humor…that hides some real pain. Uncovering his layers was a true delight, and giving him the foil of his heroine Maeve, a strong-willed beauty with backbone, felt perfect. With some humor, angst, medieval political intrigue, and sexy moments, His Rebel Bride is definitely a fave of mine.

The medieval Brothers in Arms trilogy focuses on three daring knights and winning the hearts of the women they love.

Then he truly kissed her, insistently, hungrily, rapaciously.

Maeve had never imagined a mating of the mouths so deep she drowned in its hot urgings. His scent slid across her senses, heightened to his every breath, his every groan. His lips played with her need, surging it skyward until she boiled.

Maeve scrambled to thrust her fingers under his tunic. Kieran sighed his approval as one of his hands made its way from the small of her back to the underside of her breast.

Tensing, Maeve felt his thumb playing just beneath her nipple. His mouth continued to plunder and give, always demanding and bestowing complete assurance.

Her nipple tingled, tightened under his ministrations. She felt herself moisten and swell, hunger howling like a fierce wind, drugging her veins like the heaviest wine.

This need consumed her, stirred her. Surely such desire for her enemy was a sin.

The thought chilled Maeve. What of Quaid? What of Ireland?

Horror, then guilt, crushed her ardor, and she jerked from his embrace. She hated that she panted and ached, that her mind felt somewhat sluggish and uncertain.

Pressing her temples, Maeve closed her eyes and willed rational thought to return, but she could still scent Kildare in the thick air between them, still feel the throb of her need pulsing with every heartbeat.

She opened her eyes to regard him. His tunic sat askew on his shoulders. His hair lay rumpled from her fingers. Those unusual blue-green eyes looked dilated and heavy-lidded. From pressing against him, she knew the state of his arousal. And she wanted him.

Biting her lip to keep in her cry, she shook her head. ’Twas unfair she should be married to the one man who challenged her, who could make her blood dance to his rhythm—and that Fate had chosen him as her enemy.

“You promised me a fortnight’s wait, my lord.”

Disappointment hardened his features. “To adjust you to the idea of our marriage, my lady. A few moments ago, you seemed quite reconciled to our…union.”

Maeve looked away and tried to muster up some anger for him for such a sneer. But he only spoke the truth.

“It is Lent, the time for sacrifice.”

He regarded her with a cynical stare. “And you decided to give up sex until Easter?”

“Your thoughts are uncertain,” he corrected. “You felt more than fine.”

’Twas no use trying to argue with him in this mood. She had broken their unspoken truce. Part of her mourned that, for she hated the anger between them. Part of her knew there was no other way. She was not ready to give herself over to him, to be intimate with him in every way he desired. He wanted more than a husband sought from a wife. With him, there would be no fleeting kisses, no quick entry, no short possession.

Nay, he wanted a lover to envelop, to overwhelm.

The realization frightened her.

“I’ve asked you to wait another eight days. I shall hold you to each one.”

So I might hold my sanity a little longer, she thought, fleeing his room for the sanctuary of her own.

But she knew ’twas temporary. He was a warrior, a predator. He would hunt her down, stalk her senses, and capture her eventually.

’Twas simply a matter of when. 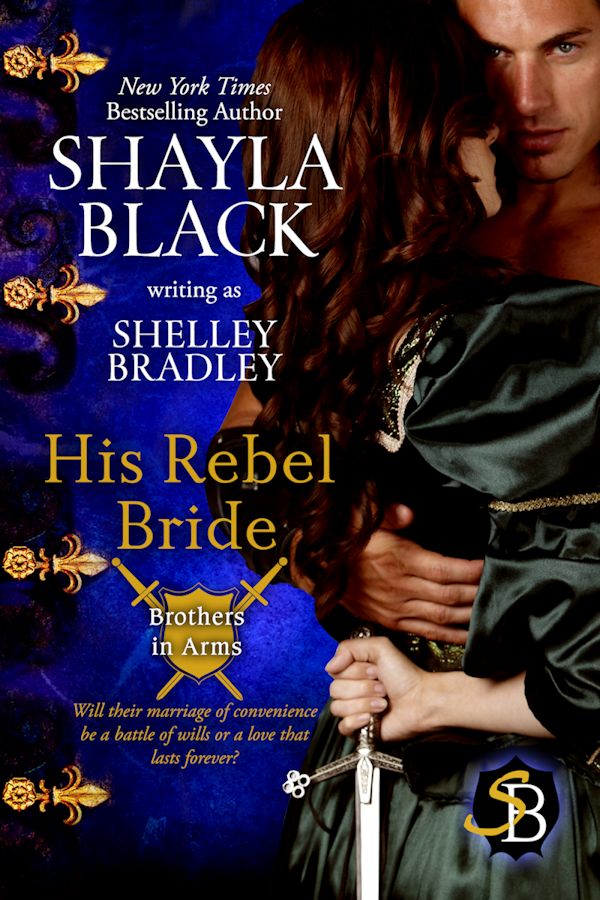 AMAZON US I BARNES & NOBLE