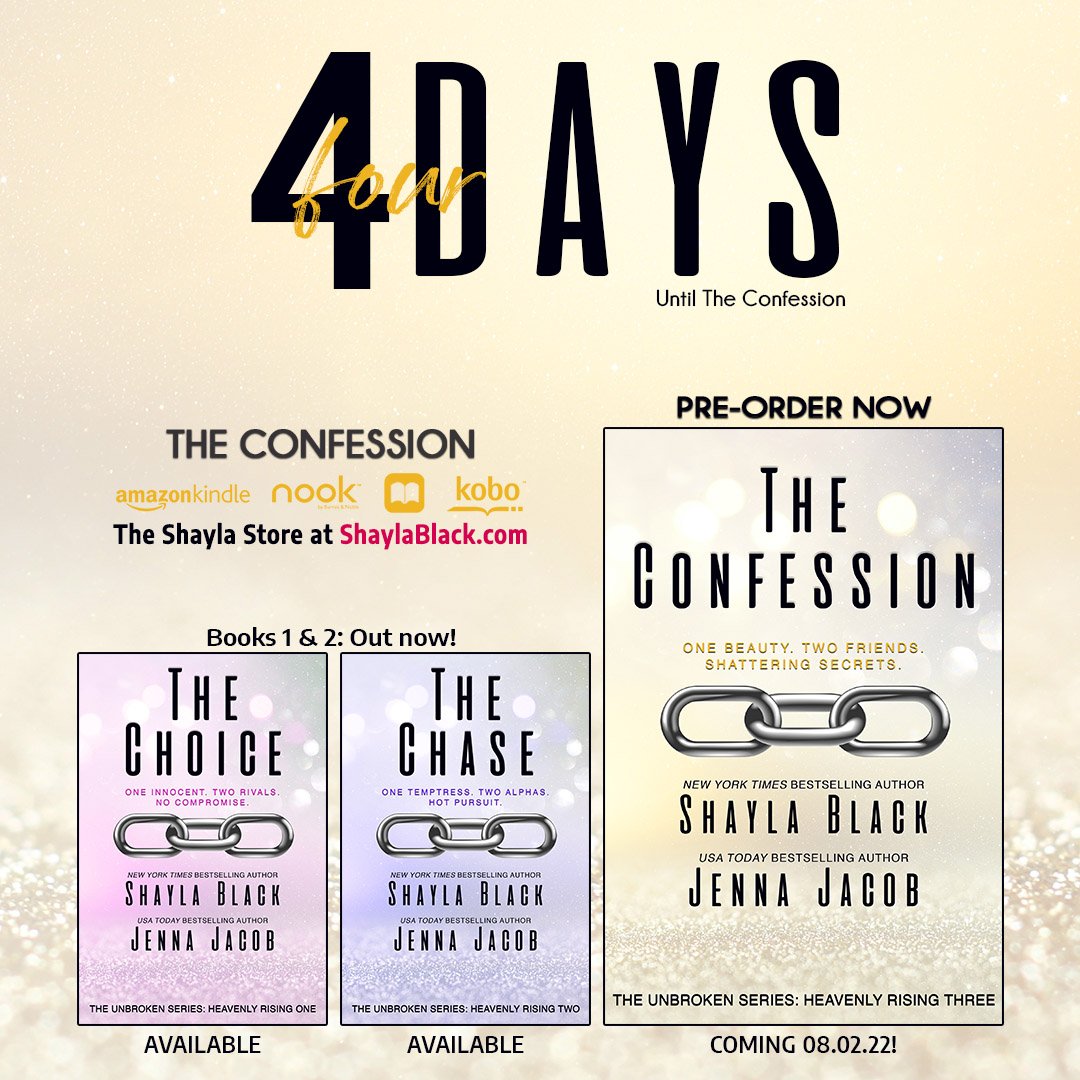 Enjoy this snipped from THE CONFESSION, coming August 2nd!

“I’m sorry. That isn’t my intent. You know I can be gentle. I can love you softly, sweetly—in whatever way you need. Everything that happened is in the past. It was years ago—”

“But that part of you still lives and seethes under your surface.”

Seth couldn’t refute her. Instead, he glanced over her shoulder at Beck for help.

“He’s not pretending otherwise.” The surgeon pushed away from the kitchen island and made his way toward them. “He’s only saying that there’s more to him than violence. And you know that. Come here.”

When Beck fitted his hands around her waist and tried to pull her away from his grip, Seth resisted, pinning the doctor with a warning glare. Beck met his stare, his eyes full of calm. They asked for trust. Seth hesitated, then released her into the surgeon’s care. Heavenly exhaled and relaxed against Beck when he fitted her back to his chest.

Then he banded his arm around her middle and dipped his head, caressing the shell of her ear with his lips. “Do you trust me?”

“Yes.” Her reply sounded steady, sure.

Seth hoped like f@ck the surgeon didn’t ask Heavenly if she trusted him. After everything he’d admitted today, he knew the answer and he couldn’t hear the terrible truth. “Beck—”

“It’s fine,” he insisted, wearing an expression that told him to shut the f@ck up.

It went against his grain, but Seth did it. In Heavenly’s eyes, the doctor had the moral high ground.

“Would I ever steer you wrong?” Beck asked her.

“Have I ever hurt you?” A smile quirked the corner of his mouth. “Unless you asked me to.”

“Have I shown you that I only ever want what’s best for you?”

She let out a shaky breath. “Yes.”

“I have,” Beck agreed. “I always will. You said you trust me, little girl.”

“Good. I trust Seth. I trust him with my life. And I trust him with the most important thing in my world.” He skimmed his lips down her neck, cascading them across her shoulder as he caressed the strap of her cheerful sundress down her arm. Then he repeated the process with the other strap, leaving her bodice clinging to her breasts.

“Shh.” He lifted the hair away from her neck and settled the mass of waves across one shoulder, leaving her nape bare and vulnerable to his questing lips. “Let us prove your trust isn’t misplaced.”

The words had barely cleared Beck’s mouth before he tugged on her dress and her breasts bounced free, naked and supple and topped with hard berry tips that tempted Seth to throw caution to the wind. But he held back, his stare burning its way across her pale skin and beautiful, familiar curves.

Thankfully, she didn’t protest. In fact, the uptick in her breathing suggested that she was aroused.

Lava flowed through Seth’s veins while he waited for Beck’s next move. It wasn’t long before the doctor skated his fingertips across the top of her shoulder, then glided over her collarbones, before diving slowly down, down, down just beside her nipple, skimming very near her cleavage, before rounding underneath—then lifting her whole breast in his palm.

Heavenly inhaled into his touch, her flesh filling his hand. He thumbed the sensitive tip. Her exhalation turned shaky as her eyes slid shut. Bliss washed over her uncertainty.

“How does that feel?” Beck asked.

“Tip your head back on my shoulder. Just like that,” he praised when she complied. “Keep your eyes closed. Just pay attention to sensation, nothing else. Can you do that for me, because you trust me? I won’t let anything happen to you.”

She hesitated, probably because she knew Beck wouldn’t be the only one touching her. Finally, she bit her lip and nodded. “Yes.”

“Good girl.” He palmed her other breast, then plucked at the tips with his fingers, hardening her nipples even more. “What is your safe word?”

Watching them was a f@cking turn-on, but Seth was dying even more to touch Heavenly, to reaffirm himself as not merely her violent protector, but as her lover.

Apparently, Beck had the same idea since he motioned Seth closer with a bob of his head.

He could hardly wait. Heavenly was half spread out in front of him like a buffet, but he wanted her fully open to him. After she’d nearly turned him away, he was eager to insinuate himself inside her again as deep as he possibly could, in every way she would let him.

But Seth forced himself to be patient. If he pounced on her, she might balk or safe word out.

Instead of fitting his mouth over her upturned lips, filling his hands with her t!ts, and consuming her, he stepped closer, letting her feel his body heat, nothing more.

“Didn’t Beck tell you to keep your eyes closed?” Seth corrected her.

“Yes.” She shut them again immediately.

But she was deliciously aware of him, as evidenced by the fact her nipples in Beck’s palm turned rosier and harder, her breaths turned even choppier.

Then he took her hips in his hands—and pulled on her dress. She bit back a gasp as the thin garment floated down her thighs and skimmed her knees before falling to the floor.

She stood before him, trembling, in nothing but tiny, transparent white panties with a feminine filagree design, lace trim, and a little pink bow.

She sounded anxious, and he tried to decide how best to answer her honestly while still putting her at ease.

Beck intervened. “Stop. You trust me, and I trust him. You have a safe word. Unless you want to use that, he’ll do whatever he wants to you. Do you understand, little girl?”

Her breathing turned increasingly uneven. Her nipples hardened more. Her chest flushed with a fresh splash of rosy color. Seth would bet that, if he touched her p@ssy right now, she’d be soaking wet.

Holy sh!t. This was bent enough to excite his kinky heart; no surprise about that. But it was turning her on, too?

Her whisper whipped through Seth.

“Excellent,” Beck murmured in her ear, then gave her a little nudge in Seth’s direction. “Now go upstairs with him.”