One Dom to Love

Raine Kendall has been in love with her boss, Macen Hammerman, for years. Determined to make the man notice that she’s a grown woman with desires and needs, she pours out her heart and offers her body to him—only to be crushingly rejected. But when his friend, very single, very sexy Liam O’Neill watches the other Dom refuse to act on his obvious feelings for Raine, he resolves to step in and do whatever it takes to help Hammer find happiness again, even rousing his friend’s possessive instincts by making the girl a proposition too tempting to refuse. But he never imagines that he’ll end up falling for her himself.

Hammer has buried his lust for Raine for years. After rescuing the budding runaway from an alley behind his exclusive BDSM Dungeon, he has come to covet the pretty submissive. But tragedy has taught him that he can never be what she needs. So he watches over her while struggling to keep his distance. Liam’s crafty plan blindsides Hammer, especially when he sees how determined his friend is to possess Raine for his own. Hammer isn’t ready to give the lovely submissive over to any other Dom, but can he heal from his past and fight for her? Or will he lose Raine if she truly gives herself—heart, body, and soul—to Liam?

The Young and The Submissive

One woman. Two lovers. So many secrets…

Raine Kendall has everything a woman could want…almost. Sexy, tender Dom Liam O’Neill is her knight in shining armor, but Raine keeps pinching herself. Is he too good to be true or is this growing connection one that could last a lifetime? She’s constantly torn by her abiding feelings for her commanding boss, Macen “Hammer” Hammerman, especially in the wake of the mind-blowing night he cast aside the barriers between them and ravaged every inch of her body.

Hammer, Liam’s former best friend, can’t stop coveting Raine. But Liam is determined to hold and guide the woman he loves and see if she can be the submissive of his dreams. However, he’s finding that her trust is hard won and he needs a bloody crowbar to pry open her scarred soul. So he risks everything to win her once and for all. But once he’s put his daring plan in motion, will it cost Liam his heart if he loses Raine to Hammer for good?

The Edge of Dominance

Now that Macen “Hammer” Hammerman shares the bond he’s long craved with Raine Kendall and his best friend, Liam O’Neill, he should be looking forward to a bright future. But recent trauma has exhumed the demons Hammer thought long buried. He must confront them while Raine fights to forget her past and Liam struggles to keep their new family intact.

When a shadowy figure emerges, determined to right old wrongs, he sets in motion a plot that threatens to tear the trio apart forever. With emotions running high and forces mounting against them, can they battle their foes and bury their ghosts so they can live happily ever after?

“Hammer. Wake up,” a familiar voice whispered in his ear. “There’s a problem.”

Macen “Hammer” Hammerman jackknifed up, the fog of sleep dissipating. Liam O’Neill stood above him, over the bed.

Why the hell was his best friend waking him up in the middle of the night?

With a frown, Hammer rose on one elbow. “What?”

Liam’s stare fell on Raine Kendall in the rumpled bed they’d all shared last night. Hammer glanced at the woman they both loved. Images of her moaning, melting, and writhing between them flashed through Hammer’s brain like a sensual strobe. Thankfully, she was still asleep, her inky lashes fanning over her rosy cheeks.

But Liam’s face tightened, the man’s tense expression giving him pause. “Tell me.”

“She’s exhausted. Let’s not wake her.” He jerked his head at the open door. “Bathroom.”

Hammer scowled. Had something happened after he’d crashed? Had Liam and Raine fought? No, he wouldn’t have slept through that. Whether she was upset or in the throes of passion, she never held back.

What if Liam had reconsidered their arrangement and refused to share her anymore? That idea whacked Macen with fury. After years of denying himself her touch, he couldn’t wait to have her again. If his Irish pal thought she still belonged exclusively to him simply because she’d once worn his collar, he’d lost his fucking mind. Hammer had rescued the scared runaway from an alley and taken care of her for six years. That damn well counted for something.

Besides, Raine needed them both. She’d only begun to lower those towering walls around her heart in the past two days, when they’d finally started working together. Sharing her might be a new arrangement, but he and Liam had been down this path before, though not with her…and not with success. Still, Raine made them better men—and partners. Hammer knew Liam had sensed the same perfection when they’d held her. Would he really want to mess with that?

Before Hammer could say a word, Liam grabbed his trousers, donned them, and stomped to the bathroom.

Hammer brushed his lips over Raine’s forehead. “I won’t let anything or anyone come between us, precious. I promise.”

Feeling a twinge of pain in his jaw where Liam had punched him the night before, Hammer stood and worked it from side to side. Their fight had been inevitable. Jealousy and resentment had brewed for the past month, ever since Liam had taken an interest in Raine. Hopefully, the brawl had finally cleared the air between them.

Sighing, Hammer yanked his pants up and joined Liam, shutting the door behind them. In the light, Macen noticed his friend’s nose was slightly swollen, but neither of them looked too worse for wear.

What did Liam’s ex-wife want? The British beauty looked like every man’s wet dream, but under the pretty exterior, she was his worst nightmare. “You keep in touch with that bitch?”

“Hell no.” Liam reared back. “You know I changed my number after the divorce. I did it so she couldn’t call me.”

“No bloody idea.” But he didn’t look thrilled.

“So…she called you. Why is that a problem?”

“What?” That declaration jolted away the vestiges of sleep. He raked a hand through his mussed hair. “I thought Gwyneth lived in London. Why did she drag her skanky ass across the pond and park it in my club?”

“She said she needs to see me.” He rolled his eyes.

If his ex-wife simply wanted to shoot the shit—or even ask for more money—she wouldn’t have flown over five thousand miles to do it. Foreboding gonged through Hammer’s gut.

“She says it’s life or death.” Liam sent him a dry stare. “She bawled it, actually.”

If Gwyneth meant  her  death, it wouldn’t be a huge tragedy.

Hammer crossed his arms over his chest. “And that concerns you how?”

“She wouldn’t explain, just said she needs to see me right away.”

In other words, Gwyneth was staging more theatrics. Hammer scoffed. “Surely you’re not thinking of meeting her.”

“I’d rather not, but I doubt she’ll leave of her own accord and I can’t think you want to leave her in your club.”

“Not for five minutes. I’ll call Pike and have him kick her out.”

Liam gritted his teeth. “Fine by me. She’s the last person Raine ever needs to meet.”

“Absolutely.” Gwyneth had a razor blade for a tongue. No way would he let the bitch slice Raine open.

Hammer reached into his pocket and pulled out his phone to call the Dungeon Monitor he’d left in charge. He hoped this would fix their problem, but he knew Gwyneth. She wouldn’t be there if she didn’t intend to stir the shit pot. No one had a bigger spoon.

Gwyneth despised him, so if she’d come to his club and was willing to deal with him to see Liam, she wanted something badly. 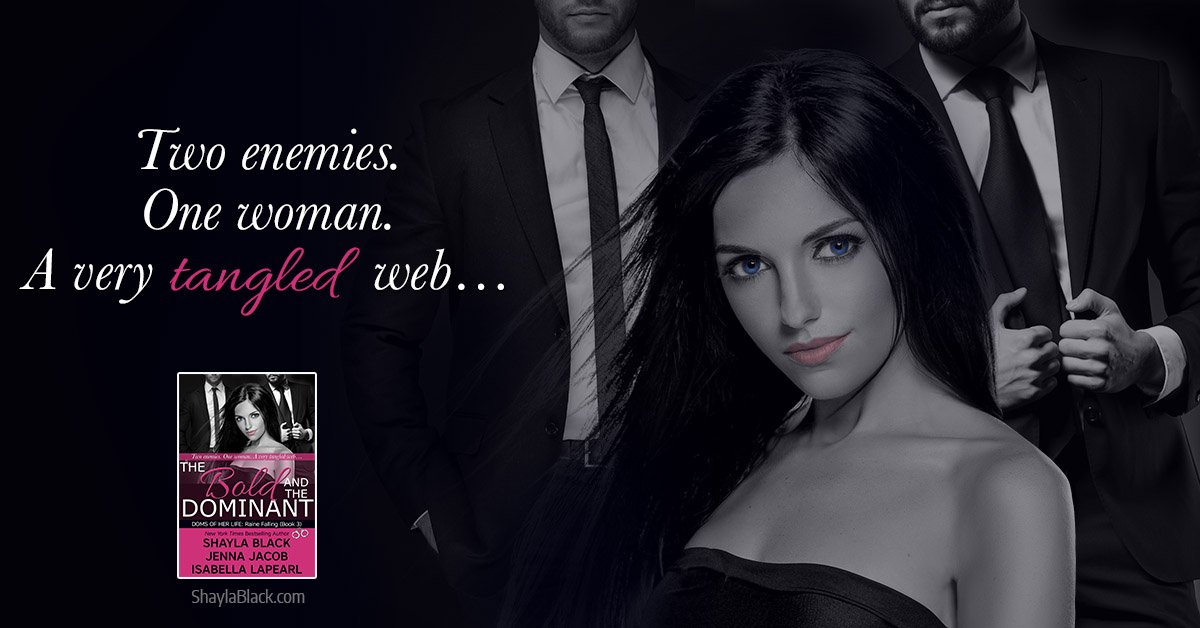 5 Stars! “Shayla Black, Jenna Jacob, and Isabella LaPearl have masterfully captured the feelings, the romance, and the intense passion… These three authors continue to blow me away… I couldn't be more in LOVE with this series…”
– Shayna Renee’s Spicy Reads

5 Roses! “The Bold and the Dominant has everything you could wish for in a book. The passion and heat between the lovers caused my own heart to race. The emotions were so strong that my own eyes were tearing up. The writing is flawless.”
– Sizzling Hot Books

5 Hearts! “Be prepared for some scorching hot moments with these three along with some touching tender moments as well. I so love their story…”
-She Hearts Books

Highly Recommended! “It was addicting and I couldn't stop. I just had to know what happened.”
– Kande’s Kinky Books

4.5 Stars! “…a passionate love story with plenty of tension and a juicy plot!”
– Marie’s Tempting Reads

4.5 Bombs! “I absolutely, positively loved The Bold and the Dominant.”
– TNT Reviews 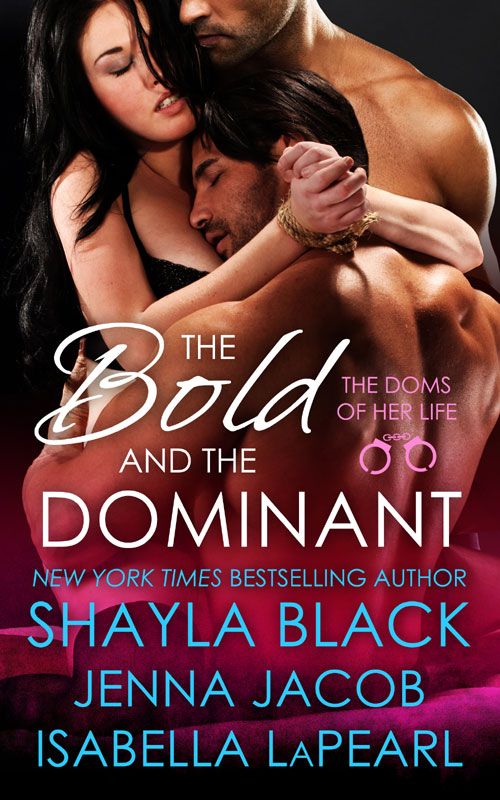